When The Hurt Runs Deep

Kay Arthur's latest book deals with hope and healing that can come from some of life's most desperate and pain-filled trials. This book addresses issues of pain caused by others, and problems you may have brought on yourself through poor decisions. Through-out the book, Kay reminds the reader that the best place to take your pain and hurts is to the cross. Jesus went through suffering that is unimaginable and He wants to bring you through this pain into a deeper relationship with Him. God can and will turn your disappointments, pain, and suffering into hope. Sharing tribulations from her own life and stories from others, the reader is assured she is not alone. There are several examples given from Scripture of others who went through pain and despair, yet were still able to not only survive, but thrive, in their relationship with God.

There were many topics in this book I could relate to : death of a baby, rebellious children, divorce, and a few other painful experiences. I know what it is like to cling to God through the pain, and there are years I rebelled against Him.While I have faced several problems through-out my life, some of the experiences that are touched on in this book are so traumatizing that I cannot imagine the sheer horror of it all. These women desperately need to know that they are not at fault and to be able to rebuild their lives. I loved the Scripture, the assurances of God's love, and the Bible study that is easily used on your own or as part of a small group study. This is certainly a book that aids in the healing of trauma and guides a person into the loving embrace of her Heavenly Father.

“I received this book for free from WaterBrook Multnomah Publishing Group for this review”.

While trying to get closets cleaned and junk tossed out this week, I came across our fish bowl. I thought about just donating it somewhere, but... the more often I glance at it, the more I am leaning toward getting another fish. Now I just have to decide whether I want goldfish (& how many) or if I want another betta fish.

My youngest son received goldfish for his 5th birthday. I finally convinced David to quit reaching his hand in the bowl to pet his new friends, but I neglected to consider his generous nature and desire to share. Sometime during the night, he apparently realized his new fish had not gotten any of his birthday cake. He couldn't get to it, so he just squirted a dollop of the canned red icing into the bowl. Fortunately, I was the first to discover the floating fish in the "Red Sea". It literally looked like a "bloodbath". 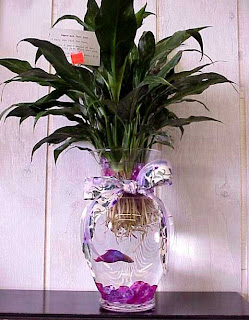 20 years later, I was ready to get another fish. The grandkids were so small when I got the betta fish, my son, Jason, put it up very high. Since I couldn't reach it either, that poor fish never had a chance for survival. It was safe from little fingers, but no one was tall enough to change the water. Jason just didn't visit often enough, so I guess I can blame him! Poor fish!!

Then about 18 months ago, I got Cody 3 goldfish. At first he truly loved Jimmy, Bearcat, & Emily, although  Jimmy was definitely his favorite. Sadly, Jimmy was the first to meet his demise. Cody was sad, but we had a proper burial in the yard underneath a beautiful flowering bush. Cody's interest in the fish also began to diminish and Bearcat's death was met with an indifferent, "Get rid of it."

That left just me and Emily...and we began to bond. Since the care of Emily was obviously now my job, I moved her bowl to the table where I would do my daily Bible reading, letter writing, & other projects. Each time I sat at the table, Emily would swim over to that side of her bowl and begin moving her mouth as if speaking to me. It really was funny. Okay, perhaps the more bizarre, was my habit of talking back. :)

One day, it was a Tuesday, I came home from The Caring Center, and headed toward the kitchen. I was going to eat lunch at the table and "talk" to Emily. To my shock, the bowl was empty!! There was no sign of Emily anywhere, and you just don't hear of people breaking in to steal a 47 cent goldfish. Unfortunately, I found the lifeless body of Emily under the table. I have never been sure if it was an accident or a suicide? Was she trying to follow me? Was she trying to escape? This is a mystery that will never be solved.

Now back to my decision: Red fish, blue fish, goldfish, no fish?
Posted by Cindy Navarro at 7:50 PM No comments:

A Deeper Kind Of Calm

This 4 week Bible Study is a follow-up to Calm My Anxious Heart, and is a wonderful guide to help a person deal with the trials and disappointments faced throughout a life time. The 4 Psalms used show how to REMEMBER what God has done in the past, to HIDE in His presence, to CLING to Him, and to PRAISE Him for what we cannot see. Most people can immediately come up with a time in their life that can be described as a "Valley Of Weeping", and this book provides instructions as you travel through that valley yourself, or as you encourage a friend who is struggling.

As a person who has gone through several valleys of this type, I can endorse this book as one very beneficial to anyone struggling with heartbreak or depression. The chapters are not very long, and the studies themselves allow each individual to reflect on the what the Psalmist is saying and how it could pertain to her individual situation. It is also set up to be used in either a small group setting or as a study you can do on your own. This makes it perfect for both the woman who needs to share her feelings with a group or for the one who needs to deal with the raw emotions alone first. This is certainly a book that will remain on my bookshelves for future needs.

Disclosure Of Material Connection: I received this book free from NavPress Publishers as part of their Blogger Review Program. I was not required to write a positive review. The opinions I have expressed are my own. I am disclosing this in accordance with the Federal Trade Commission's 16 CFR, Part 255: "Guides Concerning the Use of Endorsements and Testimonials in Advertising."

Posted by Cindy Navarro at 1:56 PM No comments: 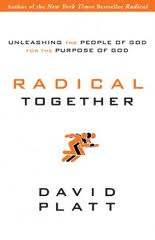 David Platt has gone a step further in this latest book to challenge believers to become RADICAL in their relationship with Jesus. In "Radical Together: Unleashing The People Of God For The Purpose Of God", the church is given 6 areas to examine on how best to lead the body of Christ to fulfill the great commission of reaching out to every nation, tribe, and tongue so that all may hear the gospel of Jesus Christ. This book, however, is for anyone who longs to make an impact for God's glory. Filled with Biblical teaching, and supplemented with stories of the commitment of others to be radically sold out to proclaiming the gospel to the lost, this is a book that truly makes you reflect on your own priorities in your walk with Christ.
On a personal note, the book speaks to me on a topic that I am finding myself to be more troubled with in recent years. While the big churches and innovative programs we sponsor are marvelous, church is becoming more of an entertainment arena. While I certainly would not advocate getting rid of the fun and even see a need to continue many of the outreach programs many churches do, I want to see more follow-up and discipleship. In the book, I would like to see even more practical advice on what people in a wider socio-economic range can do. My advance copy did not have the discussion guide that will be included in the final book, though, so I may find my answers there. However, I highly recommend that everyone read this just as soon as it is available.
I received this book for free from WaterBrook Multnomah Publishing Group for this review.
Posted by Cindy Navarro at 1:04 PM 2 comments: 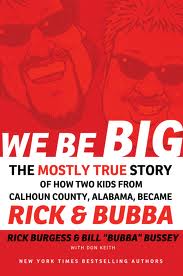 Once again, Rick and Bubba be big winners in the field of books!! As a long time fan of their show, I knew most of the stories, but that did not in any way diminish my enjoyment of their latest publication. For those unfamiliar with the Rick and Bubba Show, this is the perfect way to get to know exactly who they are. For the newcomer to their radio program, this overview will get you up to speed and answer many questions. I looked at the book more like a reunion; you know how it is when family or friends gather: The same stories may be getting retold, but they still evoke laughter and, perhaps, a few tears.

We Be Big is a chronological telling of the highlights of their childhoods, and their enduring friendship and career. Each chapter alternates between Rick and Bubba speaking, at times giving their own perspective of the same event. You definitely get to know the unique qualities...and faults...of both men. Their strong Christian faith, conservative views, and their sense of humor, in even the most common events, shines through the pages of this book just as brightly as it does on the radio program.

Disclosure of Material Connection: I received this book free from the publisher through the BookSneeze.com book review bloggers program. I was not required to write a positive review. The opinions I have expressed are my own. I am disclosing this in accordance with the Federal Trade Commission's 16 CFR, Part 255 : "Guides Concerning the Use of Endorsements and Testimonials."
Posted by Cindy Navarro at 8:59 PM No comments: