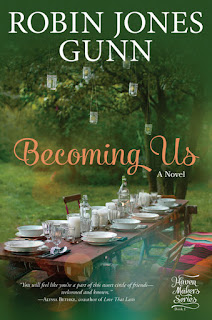 Five young women, including beloved Gunn characters Christy Miller and Sierra Jensen, gather for a simple Christmas party and soon become unlikely best friends. Told from the viewpoint of Emily, a timid young mom going through a difficult season of life, the regular gatherings provide the much needed community she's longed for. As the women begin sharing their life stories in Becoming Us they are endeared to each other and find ways to challenge, encourage, and help each other become the nurturing mothers they wished they'd had when they were growing up. They see themselves as Haven Makers and unite to be remembered for what they do and not for what was done to them. (Amazon description)

Becoming Us by Robin Jones Gunn brings together 5 young mothers who connect and form a close bond with one another. The story is told mostly from the POV of Emily who has recently moved from North Carolina to California with her husband and young daughter. Unlike the others, Emily's child is not a baby or toddler, so that plus being in a very vulnerable season in her life causes her to be hesitant about forming friendships within the group. When an unexpected event thrusts her into a shared experience, however, she allows herself to be pulled into the group.

The transformation of Emily from a shy, lonely, timid woman who has allowed family to shape her life into a person emerging from the shadows strong in faith, confident in herself, willing to take risks, and determined to do what is best for herself, her husband, and her child is an encouraging story for anyone who struggles to find herself. Both Emily and her husband Trevor make strides to lean less on their own thoughts, understanding, and indecisiveness and to trust fully in God... which also is a lesson observed and adopted by daughter Audra.

For the fans of Christy Miller and Sierra Jenson, it will be a treat to revisit them in "Haven Makers" series. I know Robin Jones Gunn through her "SisterChicks" books, but now I want to read more. I give Becoming Us 5 stars and look forward to reading future books about these friends.

I received a copy of this book at no cost to myself as part of the WaterbrookMultnomah Becoming Us Launch Team. All opinions are my own.

RobinGunn.com
WaterbrookMultnomah.com
Becoming Us on Amazon
Posted by Cindy Navarro at 2:20 PM No comments: 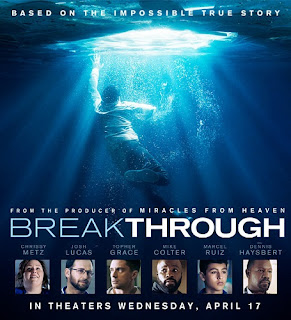 BREAKTHROUGH is based on the inspirational true story of one mother’s unfaltering love in the face of impossible odds. When Joyce Smith’s adopted son John falls through an icy Missouri lake, all hope seems lost. But as John lies lifeless, Joyce refuses to give up. Her steadfast belief inspires those around her to continue to pray for John’s recovery, even in the face of every case history and scientific prediction. From producer DeVon Franklin (Miracles from Heaven) and adapted for the screen by Grant Nieporte (Seven Pounds) from Joyce Smith’s own book, BREAKTHROUGH is an enthralling reminder that faith and love can create a mountain of hope, and sometimes even a miracle.

My Review: The film is a well-made telling of an incredible story that is based on actual events. An excellent cast has already propelled the film into the Top 20 of Christian films with a theatrical release. Chrissy Metz is amazing as Joyce Smith... a mother with a strong faith in God and love for her only son. Topher Grace brought charm and humor to the story as the family pastor and the friendship that developed between him and Joyce touched me as they put aside personal differences to join together in a common cause. Dennis Haysbert gives a stellar performance, as usual. Each member of the cast is to be commended for their portrayals.

I loved the music, production was outstanding, and I give the movie an A in all areas. This is one I will be buying on DVD when released.

Posted by Cindy Navarro at 1:07 PM No comments: