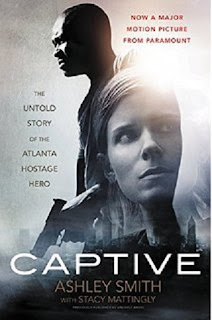 CAPTIVE, based on a miraculous true story that drew the attention of the entire nation, is a thrilling drama about the spiritual collision of two broken lives.  When Brian Nichols - on the run as the subject of a city wide manhunt and desperate to make contact with his newborn son - takes recovering meth addict Ashley Smith hostage in her own apartment, she turns for guidance to Rick Warren’s best-selling inspirational book, The Purpose Driven Life.  While reading aloud, Ashley and her would-be killer each face crossroads where despair and death intersect hope.

My Review: I confess that I found this book much more interesting when I read it originally under its previous title, Unlikely Angel. I am sure it was because all of the events were still fresh in my mind and a second reading seems more like a rehash of what I already know. But, I can't hold that against the author. It is an interesting story of how God can use us to reach out to anyone placed in our path, no matter the circumstances, and that we truly are safest when we are in the center of His will. Ashley was able to reach a core of decency within a man who had ruthlessly murdered 4 other people and connect with him. At the same time, she was also able to grow spiritually and strengthen her resolve to trust God and become the person she needed to be for herself and her child. My biggest disappointment is that there was not an update at the end of the book on what is happening to the everyone today. I am curious if Brian Nichols turned his life over to God and if his encounter with Ashley had a major impact on him, other than his capture and imprisonment. It's a 3.5 for me.

GIVEAWAY: FlyByPromotions has a copy of the book for one of my readers. Leave a comment to enter by end of day September 20th.

Disclaimer: I was provided with a copy of this book by FlyBy Promotions in order to write a fair and honest review. The book was my only compensation.

I also want to mention that there is a film version of the book coming out this month!

TWITTER
Posted by Cindy Navarro at 10:07 PM No comments:

When Calls the Heart - Trials of the Heart 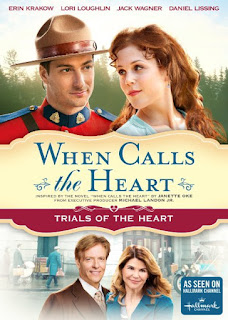 "Trials of the Heart" is the the start of the second season of When Calls the Heart. When Elizabeth receives news that her mother has taken ill, she returns to Hamilton with Jack as her escort. Once there Elizabeth and Jack are reminded of their different backgrounds as they are surrounded by her affluent family and Elizabeth’s former suitor, Charles Kensington...and her unexpected first meeting with Jack's brother.

Back in Coal Valley, the trial gets underway in the town with a new judge and a new attorney for the widows who is not what they expected. Abigail meets a family member she was unaware of who provides the key to the outcome of the trial. Jack has to reevaluate his importance in Elizabeth’s life.

My Review: This new season brings new characters and some changes to the town. A couple of my favorites are no longer part of the series, but I am intrigued by new developments with the new characters and further development of some we were previously introduced to. There also seems more of moving on to a new chapter from the tragedy of the deaths of so many coal miners. The trial concludes, bringing some closure to people's lives and turning to a new direction. I did not love this one as much as I have those from season 1, but there were quite a few changes for me to assimilate. It's just my nature to be hesitant when new things come along. But, I have no doubt I will be drawn back into charms of this series.
Disclaimer: I received a copy of this DVD from EDIFY MEDIA. I am disclosing this in accordance with the FTC 16 CFR, Part 255 'Guides concerning the use of endorsements and testimonials in advertising. I was not asked to write a positive review and all opinions expressed are my own.

Keep up with news and other fans. You can search social media sites using #Hearties
Follow @WCTH_TC on Twitter
Like When Calls the Heart on Facebook
Join the Hearties FB Fan Page Group
Posted by Cindy Navarro at 12:10 PM No comments:

90 Minutes in Heaven by Don Piper and Cecil Murphey 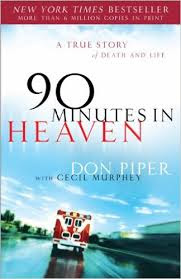 Pastor Don Piper died January 18, 1989 when a semi-tractor truck crushed his car.  Declared dead by the first rescue workers to arrive on the scene, Don's body lay under a tarp for the next 90 minutes.  Don's soul, meanwhile, was experiencing love, joy, and life like he'd never known before.  Don was in Heaven.

When another pastor's prayers helped bring Don back to life, he became a living miracle!  Yet this is one miracle Don wished never happened.  Heaven's bliss was replaced by excruciating pain and emotional turmoil.  With the support and prayers of his beloved Eva, their three kids, and friends near and far, Don clings to his faith in God and fights to regain a semblance of his previous life.  The Piper family's incredible true story of perseverance and overcoming the challenges of life - and death - will bring hope and encouragement to all who see it. (publisher description)


My Review: If you are looking for a book that is completely filled with images and experiences of being in Heaven, this is not the book for you. But, I would also be more skeptical if that had been his focus. The book told enough to share his assurance that Heaven is real and that it is indescribable. Too many details would make me doubt the veracity of his experience.

I did love the story of the power of prayers to make a profound impact. I am sure Mr. Piper was a man of compassion before the accident, but his ability to respond to others facing similar situations sends a tremendous message. He confesses to sometimes wanting to die, especially after leaving a place of great joy and peace. However, instead of being bitter over the constant pain and adjustments he has had to make, Piper turned his suffering into a source of strength and hope to encourage people. To me, the message of the book was that we can endure whatever happens in life---when we have our community who supports us with prayer, God and the promise of Heaven ahead. "Now, Lord, what do I wait for? My hope is in You." ~ Psalm 39:7

GIVEAWAY: FlyByPromotions has a copy of the movie edition of the book for one of my readers. Leave a comment to enter by end of day September 15th.

Disclaimer: I was provided with a copy of this book by FlyBy Promotions in order to write a fair and honest review. The book was my only compensation.
I also want to mention that there is a film version of the book coming out this month!

About Giving Films:
Giving Films is passionate about sharing hope-filled movies and donating ALL of their profits to charities and ministries who serve those in need.  Beginning with their first film, 90 Minutes In Heaven, Giving Films is allowing all of us to be a part of making a difference.  Anytime you go to a Giving Films movie in theaters, visit http://www.givingfilms.com and select which charities you want to receive the profits from your ticket.  Their charitable organizations are Christian Alliance for Orphans, Faith Bridge Foster Care, Hire Heroes USA, Hope International, LifeWater, Street Grace, and World Vision.

Posted by Cindy Navarro at 10:44 PM No comments:

Keep Your Love On by Danny Silk 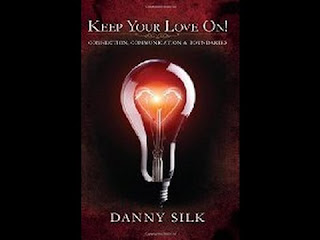 Keep Your Love On: Connection and Boundaries by Danny Silk

Danny Silk, a member of the leadership team of Redding, California's Bethel Church, wants to raise the standard our culture has on the definition of love. He wants people to have a mature Jesus-focused love instead of our more immature version of love that is based more on emotion and what we are feeling. Silk offers ways for people to "keep their love on" during all times and not give up easily during times of conflict. According to Silk, there are 5 ways to help you to choose love.

1. Consider the other person’s love language. Based on The 5 Love Languages by Gary Chapman, knowing your own love language, as well as your loved ones can make a tremendous difference.

2. Become powerful. Power is not about controlling others. Powerful people learn to control themselves.

3. Turn your love on. Know that love is a choice and it is up to you to seek a connection and commitment.

4. Communicate. You don't have to agree on everything, but you do need to listen to what the person says, thinks, and feels. Find a point of connection.

5. Set limits. Boundaries are important to maintain a healthy relationship. Creating levels of who has priority in your life is vital. If you drop everything to please everyone, and neglect those nearest and dearest to you, it is bound to cause resentment.

My Review: I loved it and and, sometimes, I really disliked it. There were times to be honest, my toes were stepped on---HARD! I mean the book started out pretty good. Silk was talking about something from The 5 Love Languages that fit a personal situation so closely that I could have sworn he was spying on me. It made me laugh, but also helped clarify things to add some resolution to my personal conflict. I was feeling pretty good. And, then...I began to read truths I did not always want to accept. Sometimes we let ourselves get comfortable and that's not always a good thing. Change can be difficult, but I recognized several things that need tweaked. Also, a couple that I need to completely revise. I wish I had been given some of this advice as a younger woman, but there is still time to grow and improve. I definitely recommend this book.

I received a free copy of this book from Shelton Interactive for the purpose of writing a fair and honest review.

Posted by Cindy Navarro at 9:42 PM No comments: