Dear Grandchild, This Is Me 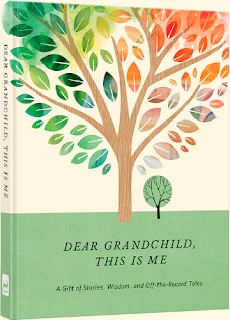 Dear Grandchild, This Is Me: A Gift of Stories, Wisdom, and Off-the-Record Tales.

This book is a special keepsake for your grandchild, inspired by you. It is a condensed diary of your life.


Being a grandparent is a wonderfully rewarding experience. With this valuable keepsake, you can gift your voice and memories to future generations. Whether providing snapshots of your childhood, details of your heritage, or your declassified personal “secrets,” your grandchild will treasure this glimpse into your unique story.


My Review: I love genealogy and family history so this is a book I am very excited about. I loved hearing stories from my parents and grandparents but some memories have faded over time and there is so much more I wish I had asked. This is a perfect opportunity to write down memories you wish to share and leave a legacy by sharing what you have learned over the years and teaching your grandchild about your values and faith.


Special Features:
* Built-in envelopes to stash special, private letters for specific occasions in your grandchild's future.
* A sheet of adhesive photo corners to adhere photographs and special memories throughout.
* Off-the-record questions to prompt fun stories.
* A family tree to trace your ancestry.
* Space to share your favorite recipes or those passed through the generations.
* A world map to showcase your travels.

Some of the questions are simple and straightforward. Others require a bit more thought. My one minor complaint is that there is too little room to answer some questions but you can always write more on paper and place it in one of the built-in envelopes.

The hardback book is beautifully illustrated and makes a perfect gift. Keep in mind, this is not a gift to give to a young child, but a wonderful keepsake to put aside for adulthood. This would be excellent to give to new or expectant grandparents so they could begin to write their memories and gather (or copy) special photos. Or, grandparents could buy one for each grandchild and began filling in the details as well as making each book uniquely personal.

I received an advanced readers copy of Dear Grandchild, This is Me for this review as part of the Waterbrook Launch Team. I was not required to write a positive review and all book review opinions are strictly my own
Posted by Cindy Navarro at 6:15 AM No comments: 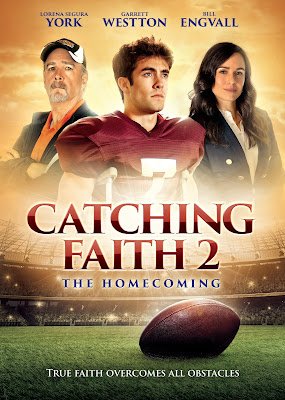 Catching Faith 2 synopsis: Everything seems to be going wrong for the Taylor family right now. Just as Alexa is starting work at her dream job, she’s overwhelmed by caring for her mother suffering from Alzheimer’s disease. Her son, Beau, has just lost his professional football career to an injury and her daughter, Ravyn, needs help planning her last-minute wedding. Only with the support of friends and the guiding grace of their faith can the Taylors find the strength to cope with the tidal wave of drama and tragedy that is rolling over their lives.

My Review: Catching Faith 2 (Mustard Seed Entertainment) is the sequel to Catching Faith... which is the story of the Taylor family. Four years have passed since the action of the original which took place during twins Beau and Rayvn's senior high school year and the passing of Alexa's father.

This time Alexa is trying to take care of her mom who has Alzheimer's, and she is just starting a dream job. When she and John receive calls that Beau has been terminated from his pro ball career due to injuries and Ravyn is engaged ... to the son of Alexa's FORMER best friend, this means both kids are also returning home. The demands on Alexa become overwhelming while John remains a steady calm in the background. Once again, Alexa draws strength from her Elijah Project Bible Study.

The film has a mix of drama and comedy and once again does bring up some salient points along the way, especially during the final quarter of the movie (just like with Catching Faith) Both films do appeal to me by the ending, but the journey to get there sometimes takes too long or can get annoying. Alexa's mom is often used as comic relief, but I dislike much of the humor... especially in this film with Alzheimer's thrown into the story arc.

The film is good, although I watched it more than once to pick up some of the nuances. It is family-friendly, and while it is not heavy on the faith side, it is faith-friendly, too. Their Christian faith is displayed and it does have a Biblical worldview with an emphasis on Christian values but I expected more based on the title.

Disclaimer: I received a copy of this DVD at no cost to myself for review purposes.

Jesus In Me - Anne Graham Lotz 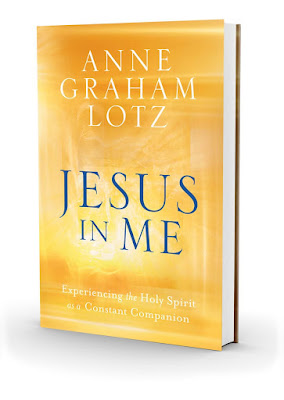 In Jesus in Me: Experiencing the Holy Spirit as a Constant Companion, Anne Graham Lotz draws on her rich biblical knowledge as well as her personal story—including her recent cancer diagnosis—to help us understand that the Holy Spirit is not a magic genie, a flame of fire, a force, or a vague feeling. He is a Person who prays for us, guides us in our relationships and decisions, comforts us in pain, and stays by our side at all times. He is not an optional extra in the Christian life; He is a divine necessity. In this simple yet profound teaching, she explores seven key aspects of the Holy Spirit that will revolutionize how you understand and relate to this vital member of the Trinity.


My Review: The Holy Spirit is the person of the Trinity that many of us are not as familiar with despite numerous Biblical references assuring believers of the vital role of the Holy Spirit in our lives once Jesus ascended into Heaven. Anne Graham Lotz has written a book to help us grow in the knowledge of our special relationship with Him and why He is a necessity in our lives.

"The indwelling of the Holy Spirit — the seal — guarantees we belong to God." (page 193) That statement alone is proof of the importance of the Holy Spirit. He is our Constant Companion — our Helper, Comforter, Advocate, Intercessor, Counselor, Strengthener, and Standby. Anne goes into more depth of what each of these names truly mean before delving deeper into how we draw nearer to Him.

Personal stories that illustrate her experiencing the Holy Spirit, along with Scriptural references and stories make this a fascinating read as well as making me longing to lean more on the Holy Spirit and not treat Him as the less important member of the Trinity. I want Him to be very evident in my life. I highly recommend "Jesus In Me" to learn more of Him. The Holy Spirit is not just an option to be ignored.

Disclaimer: I was given a copy of this book for review purposes as a member of the Waterbrook Launch Team. However, I was not required to give a positive review.


Social Corner:
Jesus In Me site

Posted by Cindy Navarro at 3:51 PM No comments:

Something Needs To Change - David Platt 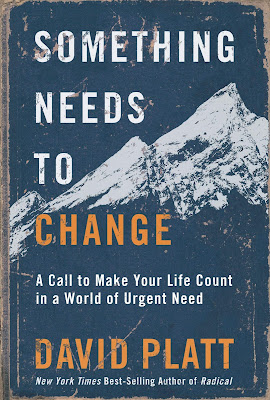 Something Needs to Change by David Platt is the mesmerizing story of the dangerous journey Platt made with several companions through some of the highest mountains in the world. Platt shares the details of the people he met, the experiences of eating and drinking local cuisine and sleeping in frigid altitudes, and of the emotions he felt and how the entire trek fit in with his daily, personal Bible study. Most of all, he shares the challenge he feels on what God wants him to do with all he encountered... and suggests that the reader prays about how God wants to use us to help make needed changes to make a difference...

Perhaps God wants to use you in a way you never imagined. The bland description above does not touch on the raw emotions as Platt describes the abject poverty and harsh conditions of the people living in remote villages. The lack of medical care, the isolation, and the drastic measures some take (or put on their children) to try for a better life; human trafficking is firmly entrenched as promises are made to people desperate for hope. Christianity is unknown in some areas and those who do turn to faith in Jesus when missionaries present the gospel are often treated with suspicion or scorn. The story Platt told about the honor of preaching in one village was touching and we are shown the tremendous faith that believers there have. But Platt also tells the stories of people, both local and abroad, who have given up all to care for these villages simply because they observed that something needs to change and they felt God equipped them to take on the challenge.

My attention was not fully engaged at times, but still, a very good read... and definitely left with something to think about.


Something Needs to Change releases September 17. You can learn more on Wednesday, September 18 when David Platt is offering a FREE SIMULCAST, giving a first-hand account of what he experienced and his prayers for the future.


Disclaimer: As a member of the Waterbrook launch team, I was provided a complimentary copy of the book. Opinions expressed are my own.
Posted by Cindy Navarro at 10:21 PM No comments: